Karlie! I've decided to be narcissistic for this letter in the ABC-along. Since I have a lot of time on my hands at the moment, we're going to have a great big photo essay. 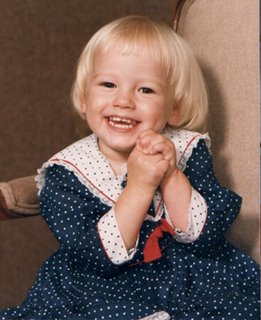 I was born in Northern Ontario in 1983. This picture is me at 1 year old. I was very, very blonde, for a very long time. I'm still blonde of course, but my hair is no longer rather clear coloured. 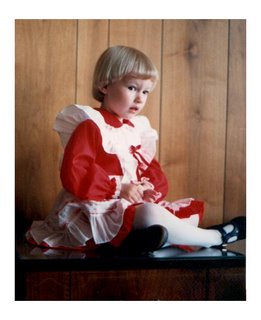 I always did have a penchant for sitting on top of things. There's pictures of me on dressers, desks, shelves, even roofs. It explains why I like rock climbing so much! This is in 1986. 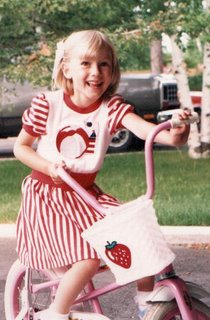 I looooooooved this bike. I would have been 4 in this picture. I remember riding it home from the Canadian Tire, and being absolutely thrilled! It took me a long time to learn how to ride it without training wheels. I think I was 6 or 7, and I took the bike out to the walkways in the backyard and fell over all afternoon finally learning. I'm trying to remember, but I think I may have taken the wheels off myself. Might have been Dad though. 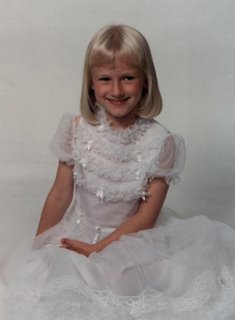 In 1990 my little sister was born, and this picture is part of a series of family portraits we took after she was born. The dress is from when I was a flower girl at the wedding of the daughter of friends of my parents. I'm not sure if it's visible in the above pictures, but I had a grey front tooth. When I was two, I fell while on a set of cast-iron steps, and drove the baby tooth up into my gums. It eventually game back down, but it was dead and therefore looked grey (incindetally, it also damaged the forming adult tooth, and in some of the pictures below you can see its mottled colour). For these portraits my Dad, a dentist, put a white ceramic coating over the grey tooth so that it would look nicer. They had an awful time stopping me from running my tongue over the tooth under my lips. 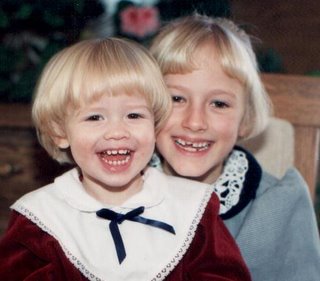 A very cute Christmas picture of my sister, Becky, and I. This is in 1991. I think this is the year we gave Becky an orange and blue Little Tykes slide to go in the basement. Dad and I put it together out in his woodshop. Becky was thrilled, and it was a wonderful toy that was used for many, many years. 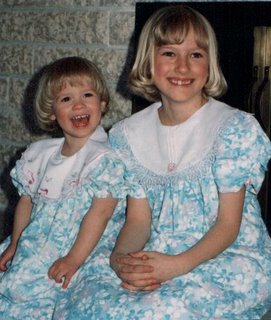 This was my grandparents 50th wedding anniversary. Our dresses, as you can see, match, and were rather cute. They both had very stiff crinolines underneath, and fell straight down from shoulders and stood out in a (cute) circle all wround our feet. While my grandparents were opening gifts, my sister, who was sitting on the opposite side of the couch as me, decided she wanted to see the presents and stood up on the couch, and walked over everyone's lap to the other side. Lucky she was only 2! 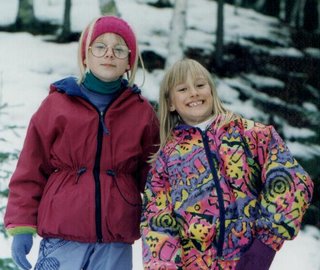 My cousins, who used to come down for a couple weeks every summer from Yellowknife, surprised us and came during spring break as well. We're down at my cabin in this picture. Notice the gorgeous neon coat, which had matching slush pants. 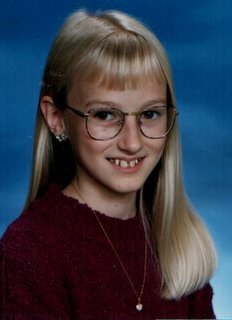 *sigh* my Grade 7 picture. Grade 7 and 8 were the worst years of my life. Although I'd been constantly bullied as school until this point, over-sexed adolescents decided that adding new arsenal like how I ugly I was and calling me a man would be entertaining. Oh well, two of my worst torturers are not doing well in University, so meh. 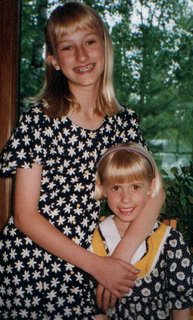 This was my Grade 8 grad dress, although here we're getting ready for a piano recital. I was SO ANGRY that my Mom had let my sister get (near) matching dress to mine. Now it wouldn't bother me at all, but when you're 12/13, these things matter. My Mom now acknowledges that this was maybe not the best idea. 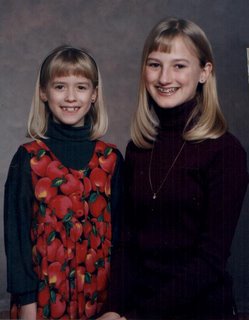 Another family portrait time, this time with my WHOLE family on my Mom's side. My cousins came down for only the second time for Christmas, and we had a good time. We all learned a dance to a Backstreet Boys song that my cousins had done for a skit night and performed it for everyone, with much hilarity. 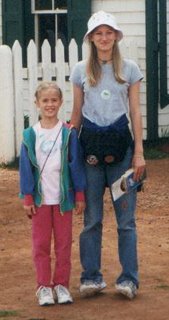 Our trip to the East Coast! I look frighteningly skinny in this picture because I'd just finished recovering from whooping cough, and was 5'3", 85 lbs. Scary stuff. Green Gables was pretty, although busy and very commercial. The best part was actually Cape Breton Island, which was at least as beautiful as Hawai'i. 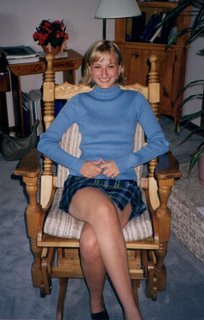 Ah, my 18th birthday party. I was about to go off to University of Alberta, I'd graduated on the Governer's Honour Roll from SJR, the high school where I found my niche as a smart, enthusiastic, and musically-inclined person. I was very, very happy! I discovered that I live best in a bigger city with more access to artistic opportunities. I know they say you can make yourself happy anywhere, but it's much easier if you can find a place you want to be. 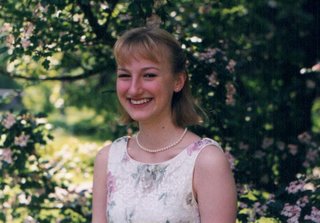 This was the dress I wore to Jenny's grad. She didn't have a boyfriend, and we were best friends, so she decided to ask me if I wanted to go. We had a TOTAL blast, although the photographer was pretty amusing. He assumed that she'd brought me as a date, and kept trying to get us to stand closer together in the picture. We were like "Oh no, no no! Just friends!" but I don't think he believed it, lol. 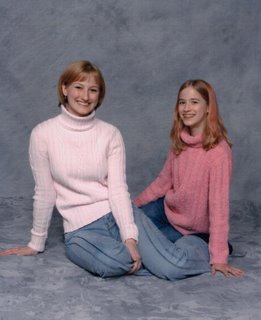 More family portraits! I was really, really sick for this portrait (part of the undiagnosed stomach problem), and covered in blush. I think they turned out well though! I'm not wild about the haircut, since it makes my face look very round, but overall it's good. 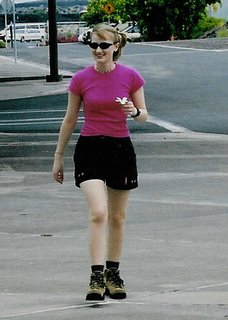 Ah Hawai'i! I got to go thanks to my parents who gave me half the money to make the trip. It was an unofficial geological field school, so we spent 8 of 9 days hiking over the lava fields. It was wonderful, although I think more than one afternoon spent on the beach would have been greatly beneficial. 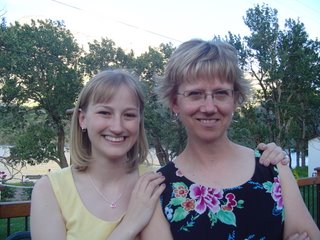 My cousin's wedding last summer. Here I am with my Aunt Brenda, who's daughter Heather was getting married. I love that dress, and I've worn it many, many times. both the shape and the colour are really nice. My Mom made it!

Someone is veddy veddy cute! And I'm glad I'm not so alone on the narcissistic bandwagon anymore... :)