Oh. My. God. It is sooooo hot here. We are in a humidex warning, this afternoon it got up to 41 with the humidity.

The scary thing? In the upstairs of the mill (where we work, it's completely unventilated) it was so ridiculously hot that outside at 41C felt cool. Knowing now that it felt like 41 outside, I'd wager that it's at least 50C upstairs. It was so hot, that less than a minute after turning off the fan, we felt violently nauseous and dizzy. Because of the high humidity, you can sweat properly either, so there's no particularly good way to cool off. I'm already wearing just a tank top and shorts at work, not sure how to cool off any more!

I finished the sockapalooza socks, except for grafting the toes (no darning needle or crochet hook) and blocking them. I noticed that I somehow wound up with two less stitches in one sock, but I checked and since this is stretchy lace they fit the same.

I also spent my spare time today (during scanning, between changing maps) graphing out the yoke of this sweater: 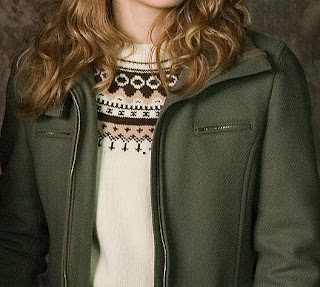 It's one of Hermione's from OOTP. It took me FOREVER, some tears, some photoshopping, and finally good old paper, pencil, ruler, and tracing paper to get it right. I wanted to make sure I accounted for the decreases properly, since I wanted it to be a proper yoked sweater. I think I've got it now! I'll try and post a picture or something soon.
Posted by Karlie at 5:50 pm 1 comment:

Not much new here, more work going on in the outrageous heat of Red Lake. I've being working on my sockapalooza socks some more (sorry Linz, no pictures still!), especially while I'm scanning.

I also want some suggestions for first dance songs for the wedding. Sean and I are wanting something older, like 40's-50's. Sean is not really a fan of Elvis Presley, nor of Frank Sinatra, although I'm not sure on his feelings about covers. My ideas so far:


As you can see, two are Presley and one is Sinatra :P Any other ideas?

I also need ideas for the Processional and Recessional. No wedding marches! Sean's a fan of Pachebel's Canon, but I really really don't want to use that one. I'd really like to use something by Bach and or Handel.

The new Interweave Knits Fall 2007 is up, and there's a few things I want to make: Dickinson Pullover, Tangled Yoke Cardigan, Cobblestone Pullover, Snowflake Socks, Sweetheart Vest (I'll add sleeves), possibly the Mirepoix Bodice once I can see the schematic. In all, enough patterns to make it worth my while to buy the magazine.

Arrr - ye be warned! Pirates: At World's End spoilers ahead!

Hi Linz! No pictures yet because my camera is on the fritz, and is consequently left at home. But soon!

As for the after-credit clip, some writers explained it thus:

A scene was cut from the movie which explained that if whoever took over the Flying Dutchman had a lover who remained true through the 10 years, the obligation to the sea and the escort of the dead would be broken, and he could return to land again. Therefore, when Elizabeth waited her 10 years faithfully, Will could come back and live with her again. It therefore doesn't cut them out of the storyline completely if the actors want to come back, but it DOES solve their storyline if they don't.

I liked the end clip, because it showed that Elizabeth and Will got to live happily ever after with one another. Plus, Will got SUPER hot this movie.

I am waiting anxiously to go home Thursday night, and miss Sean so much it's driving me round the twist (great Oz expression).
Posted by Karlie at 4:07 pm 2 comments:

Yeah, I haven't blogged in awhile. But a shout out to Linz who's rejoined the blogosphere and even posted on my blog!

I didn't post while on vacation in Winnipeg, because I was just spending as much as possible with Sean. We spent our time hanging out together, watching some movies and painting. We also planned out some stuff, which included:

-Going to the Manitoba Museum and eating some street dogs
-Sushi at Meiji
-Going to Pirates of the Carribean: At World's End
-Going to the Assiniboine Park Zoo
-Walking around Polo Park
-Eating dinner with his family

After getting back to work, Leye and I were alone (everyone else was on their holidays) and spent our time scanning. We had some nice days as the rest of the crew came back, and got to do some more good field work, but then two things got in our way. The first was weather, in which Red Lake once again bowed to the Weather Network's Summer Outlook Forecast and became incredibly rainy. The other is that I developed some strange chest infection, which kept me from scanning and bush work. However, the drill has started up again, so now I'm assisting Nesha in logging core.

I've been knitting, my first Sockapalooza 4 sock is done apart from grafting, and I'm up to the heel flap on the second. I also knitted a Gryffindor bookscarf for myself, which I can't put fringe on until I get home to a crochet hook. I've realised that the bookscarf is not really particularly useful for me, as I never put down a new Harry Potter book until I'm finished reading. Oh well, it's fun anyway :)

My next break starts Thursday evening, and I won't be posting much during that time off either. The week involves a trip to Dryden to visit and renew my license and get a bite splint made, picking up HP7, going to OOTP, and hopefully confirming a wedding location. Wish me luck!
Posted by Karlie at 5:58 pm 3 comments: