I found my camera's battery charger!!! That means that I can finally take pictures without using expensive bought batteries. So I have lots of pictures to share finally! 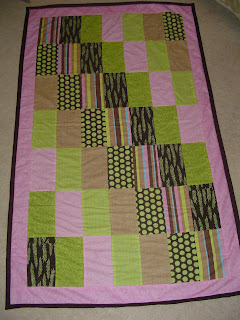 Heather and Chad's quilt is DONE DONE DONE. It's lovely and soft, and although I cleaned it I included instructions to toss it in the washer again as soon as they get it - I'm pretty sure Heather is allergic to cats and I know I can't get it perfect with two cats in the house! TI hink it turned out quite well. It has a few flaws, the lines didn't match perfectly across the horizontal, and I mis-cut one strip of the brown and green pine/feather pattern, meaning I had to piece it back together (since I had limited fabric amounts bought from the States). I hope they'll like it though, it's going out with a video for them to snuggle and watch :) 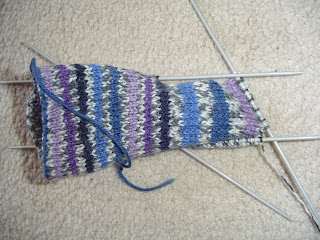 My Bus socks. I'm knitting socks while on the bus, since it's a fairly long ride. I actually started these in September and had to rip them out 3 times before I got it right (1st - too many stitches, 2nd - not enough ribbing, 3rd - not enough stitches for the heel flap). I'm finally at the point where I can start turning the heel on them, and then make the other! 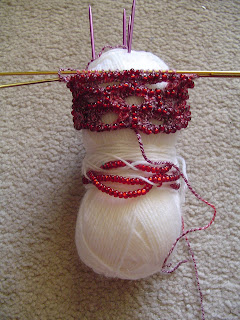 My lovely candy-cane socks from Angela. However, I'm a little unhappy with what I did with them. Angela had the beads strung on this white wool initially, but the pattern says that they should be on the same yarn as that for the body of the socks. Therefore, I went with the pattern and strung them on the red yarn, so that the white will peek through (hence the reason I took the picture this way). What do you think? Should I do the beading with the white yarn or leave it? Should the white yarn peek through regardless of what colour I use to knit the beaded portion? If it's not apparent in the above photo, those gaps are actually holes where the knitting underneath shows through, it's not knit in like it is in most honeycomb mitten patterns.

Two more pictures can be seen at the locations given below, but as they are (belated) Christmas presents I'm providing them as links instead of in the post.

both are very nice,

why can't I google your web site anymore?