It's been a long week. I got really sick with a cold/flu (not sure what it was) that's turned into bronchitis, but I am finally starting to feel better. I also found my camera cord, so this first post in a while will consist of many nice pictures. 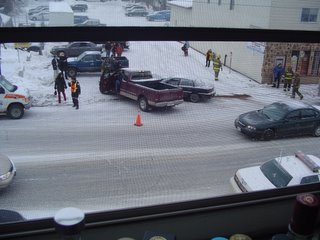 So, can anyone explain how you get into an accident like this? They're really facing the wrong way - I'm assuming the truck was making a left into the lot, and the car a right, but still. How do you not see the other vehicle? It was a very low speed crash, so they were going slow enough to see it. 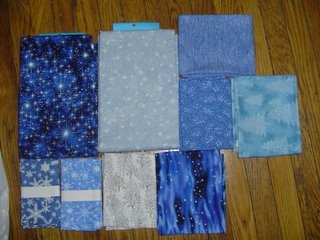 Not knitting content, but quilting content. These are all "snowflake" fabrics I'm collecting to make a gorgeous snowflake quilt. I will post a picture of the pattern later. So pretty though! 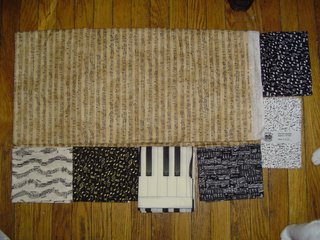 Again, more quilting content. These are musical print fabrics I'm collecting to make a music-themed quilt. I have no pattern for this, I'm just gathering fabric for now. If you have any ideas for a good pattern though, let me know! 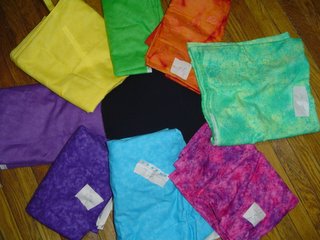 The last quilting picture (I, um, have no knitting footage because I've been too sick to knit. I'm making an Indian Puzzle quilt. In that picture, the navy "swirls" will be the bright batiks, and the background (both cream, red, and green in the picture) will be black. It will then be bordered by purple and blue to make it a queen size quilt. I am so excited to start it!
Posted by Karlie at 6:49 pm

The Indian puzzle quilt is going to be gorgeous! I have no ideas for the music quilt, but if I come across something, I'll send it to you. Feel better!