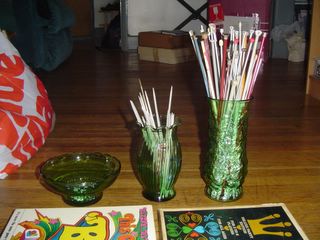 I also got these at the thrift store, that is the glass vases (they're those green bottle glass that was popular in the 70's) and ALL the grey plastic straights. I already had the coloured straights and dpn's. The vases were 99 cents each as well, and the needles - at least 20 SETS of needles, 5 bucks. Craziness, I tell you. I've been dropping in on the thrift stores fairly regularly in hopes of finding needles, and they never have any. Well, this was the mother lode. They must have just had a major drop off. The only problem is that most of them are in British sizing, and I've lost my needle-size gauge (Wal-Mart was out) so I don't know their actual sizes for now. I also don't know what size dpn's I have, but once I find/get a needle guage I'm going to use nail polish to paint stripes on them so I know what size they are. Red is for 1's, pink is for 5's, then I'll use the stripes like roman numerals. The saucer is to hold stitch markers and row counters and the like.
Posted by Karlie at 12:13 pm

What a smart idea for needle storage and the little of your apt I can see sure looks "neat"....;)

Linz said...
This comment has been removed by a blog administrator.
2:08 pm

Hmmm, this is poorly formatted and I can't seem to fix it nicely.
If you send me your email I'll send it to you nicely!