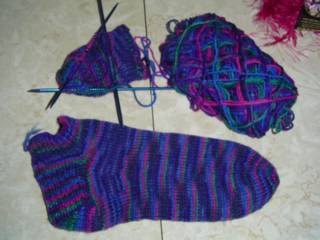 It's my sockapalooza socks! Or rather, sock and heel+ankle. I learned a new cast on technique from my new book (Stitch n' Bitch Nation), so now I don't end up with a loopy cast-on edge. However, the first sock was done BEFORE I knew this technique, so I may go just below the ribbing and pick up my stitches, then knit my way back up to the top so that it'll match the other sock better. Double cast-on RULES! Except that I don't have the hang of how much tail to leave yet, which means I often end up casting on three times before I have enough yarn to cast on all my stitches.
Posted by Karlie at 7:13 pm