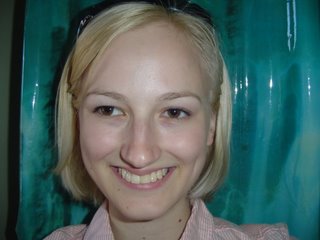 I'm sorry for the icky picture, but I needed to put up a photo of my new hair - I like to experiment with my hair, as anyone who reads the blog regularly (or knows me in person) knows. I decided to bleach it, and used a home kit. Unfortunately I rinsed that one to soon, so I had to get it repaired at the salon yesterday. However, it was a decently cheap fix, and I like the look. It's still slightly brassy, but in the next few days that will fade. If it doesn't, I'll buy a violet shampoo and that will get the rest of it out. 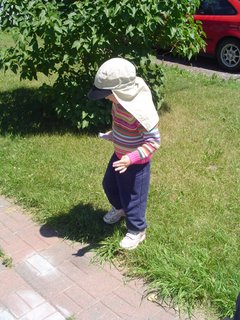 Olivia chalk drawing. I spent the afternoon with my Aunt and cousins, and we sidewalk-chalked, played in the sandbox, and had a nice snack. The kids had a neat idea of using chalkboard erasers on coloured-in bricks, which gave a nice soft blended mosaic, really pretty! Something I'd never done before. 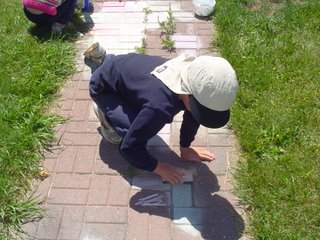 Anton chalk drawing. He and Olivia and I had such a great time! He was his regular ol' excitable self, but we had lots of fun. He went to his swimming lesson before I left.

Tomorrow Jamie, Susan, and I are going to Pirates of the Carribean, since it's cheap night at the theatre.

Oh I also went thrift shopping yesterday (I've become positively addicted, although I'm very good at only buying necessities, and it's mostly small things like bits of vintage fabric). I got some GORGEOUS shot "silk", a pretty brocade with black warp and shiny turquoise weft. The resulting colour is a deep, rich royal blue, and I"m going to make an evening bag with it. I also got 6 1970's juice glasses, since ours have started breaking. We're not dropping them or abusing them, just in the middle of washing they've been falling apart in our hands. These were at least only 3.99, so if they break it's no big deal. Plus they're kind of unique! I also got another 8 Agatha Christies - yes I know I'm moving Mom, but they're small and were .69 each. Plus it's nice to read!
Posted by Karlie at 4:48 pm

It doesn't look brassy at all!!!
Really pretty -- it suits you!