Today was a great day! I got to go out and do soil sampling, which meant riding on the ATVs (woohoo!) and spending time outside (double woohoo!). Most of our soil was very clayey, but that's to be expected because we're in Northern Ontario. I found some Creeping Snowberry

and gave some to Jeff to taste. It was amusing, although he thought the flavour was OK (usually snowberry tastes like a sour minty flavour) the texture was definitely not to his liking.

We had an enjoyable lunch, and while we were at the creek side taking a sample I found some wild mint! 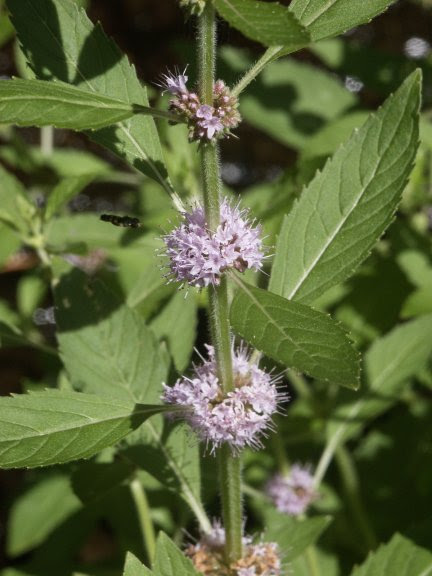 I picked a quick bunch before we moved on, and while we were waiting at the ATVs for Blaire and Leye I found another massive cluster! So I picked it all and now they're drying on papers on my other bed, drying out for a nice treat this winter. I might go out with Sean in the evening once he gets here and pick LOTS more, it would make good Christmas presents. Wild mint tea is much more flavourful and wonderful than bought tea, and is very sweet.

I can't wait until Sean comes up! He'll be here in two nights, on Thursday. We've also potentially found an apartment, though we need to be approved and sort out a few things. It's got gorgeous hardwood floors though, and is closer to the University. It's much smaller than our current apartment, so we're already working on getting rid of some stuff, and more will be on its way out once I get back to Winnipeg.

Now, I really need to clean up this room in preparation for Sean. No time tomorrow, Wednesdays are for Bingo!
Posted by Karlie at 8:08 pm