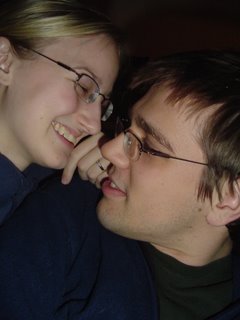 R and S are for...ring and Sean! Finally, the long-awaited picture! Although this isn't a clear shot of the ring (next time) you can see it on my finger, and of course the FHF (Effing-hot Fiance) Sean. I look a bit rough in the picture, but that's because it was awfully cold here today (OK Marcia, not as cold as you! :D) and I had put on and take off my hat a bunch of times. Sean looks tired because he's in the midst of a term paper. But anyway, here's my alphabet.

R is for ring.

This is the ring Sean gave to me when he proposed in August, 2006. It's white gold, set with a .25 ct Type IIa brilliant cut diamond (can you tell I'm taking gemology?). It's absolutely beautiful and very simple. For a wedding band to go with it I think I'd like another white gold band, with a small amethyst and maybe a chip diamond on either side.

S is for Sean.

The wonderful, marvelous, hot, caring, loving, nerdy, techie Sean. My fiance. We met in Geophysics class in January 2005, and were introduced (to be friends!) by our friend Keith. Although Sean says his first memories are of watching me stretch in class - the chairs were uncomfortable, so I would arch my back over the back of the chair, not realising that this was drawing the attention of every boy in the class - the other thing we really remember is the day that one of the replacement professors started writing random multi-variable calculus questions on the board. While our much-younger classmates started going glassy-eyed, Sean leaned over to me and muttered "I don't know if that's Geophysics or he's giving us instructions to build a Warp Engine.". When I burst out laughing, he decided that I was definitely a girl of interest! :) We started hanging out and eventually dating nearer the end of the school year, and have been together ever since. We've been hiking at Cascades Park, visited the Mall of America, and lived in 3 different apartments together. A sure sign of our relationship is the way his cat Kyp has bonded to me - he spends every moment either lying beside me or sitting in my lap or on my chest. I love him with all my heart!

Another thing Sean introduced me to. The first time I tried it was in Mall of America, at Tiger Sushi. I only ate the vegetarian California Roll, which had pickled carrots, cucumber, and avocado. I wasn't thrilled, and particularly hated the taste of the nori. Later on, he convinced me to go to The Sushi Bowl in Thunder Bay, where I was suprised to learn I was liking Sushi! Since then I have become more and more obsessed, and no longer limit myself to the veggie stuff. My favourites are California Roll - with Crab!, Tekka Maki (tuna), and Firefly (a local special, it's tuna, salmon, chili and wasabi, and tempura flakes).

Tea! I LOVE tea. When I worked at the Fort, we usually drank it at least once a day, if not twice. Mornings were Orange Pekoe, Earl Grey, or Lady Grey (for me), and afternoons were Moroccan Mint by President's Choice. The best mint/green tea I've ever had. Anyway, I love tea in all of it's forms. I am a big fan of the roasted tea you get at Japanese restaurants, which contains roasted, puffed rice and tastes toasty and a little nutty. I drink it for the flavour, not for the caffeine kick. Favourite flavours are Lady Grey, Prince of Wales, and Monk's Blend. The last two can be harder to get ahold of, and you might need a specialty tea store to get them. Monk's Blend in particular is amazing, because it contains vanilla and grendaine flavours.

Umbrellas! I am obsessed with the Gryffindor umbrellas we see in Prisoner of Azkaban, during the Quidditch match. I would like a picture, but couldn't find any! They are pretty pig, burgundy with 2 or 3 gold stripes around the bottom edge. I lurve them though, and make it my quest to find one someday.

And some more present pictures: only click if you are NOT the person mentioned in the link!

NOT JENNY
NOT DAD

PATRICK! So glad to see you posting :D I'd like to know how to do silk-screening, I've never tried. It looks kind of hard to set up :P I need your e-mail address and your picture site because they somehow got lost in the shuffle and no one seems to have them!
Posted by Karlie at 10:36 pm

HI
I have been reading your blog for quite some time - both of you really are a cute couple and congratulations on your engagement.. and good luck with all your Xmas knitting.
Salut - du Québec !!!

Ask him about his other girlfriend though, thats wear it gets funny.

You obviously have some serious issues you need to get over... trying to destroy a happy couple won't make them better. Get counselling.

Congrats again Karlie, you deserve such a great guy, and it is a very beautiful ring! Merry Christmas to you both!