Yeah, I've been posting less. It's partly because I forget to do it, partly because I have a facebook I post on, and partly because it can be discouraging when no one comments :D Not that I expect them, I think I just need to put a hit meter in the sidebar so I know if anyone is actually reading and whether to try to post more often or not.

In work we've been doing more boating, as well as doing a lot of scanning. There is a whole room full of old mining and geology maps that were left in a leaky old shack and are nearly destroyed by moisture and mildew. On scanning days we take those maps and feed them through a wide scanner (it's 54" wide), and save the pictures so that we have at least some preservation of the maps. It's an OK job, a little monotonous but gives us a chance to chat (2 people need to do it together, to support the maps as they run through and be able to feed the maps in) and a chance to listen to some music.

I also learned how to use the log database. After Judy (or later on, us) has logged the drill core from a hole, we use a program within Microsoft Access to organize all the data (sulfide veins, ultramafic horizons, that kind of thing) so that it can be easily searched if something important comes up. For example (HYPOTHETICALLY!) if geochemistry showed us that, say, quartz-feldspar veins with green alteration were associated with gold in certain areas, we could plug that parameter in and it would show us every horizon in our drillholes which had those veins. Makes targeting easier.

Today is more boat work, since it's beautiful out. I've loaded on the sunscreen, and am going to throw some lemon juice in my hair to help it bleach more evenly in the sun.

I've also been doing some more wedding planning. I'm thinking that the colour will be purple, with pink and gold accents. I like the idea of the men having Dendrobium orchid boutonierres: 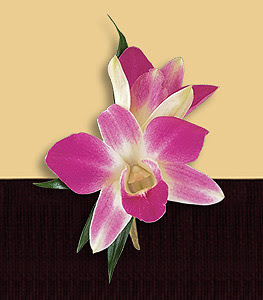 The bouquets would be those orchids along with possible irises, since they're orchid-like in appearance.

I also looked for some wedding bands, and I liked these ones: 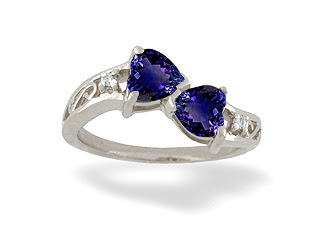 Except that the bottom heart would be an emerald - making mine and Sean's birthstones. I think it's really pretty and some nice symbolism - they're both lab-created stones, since this actually makes them more beautiful stones for a much lower price 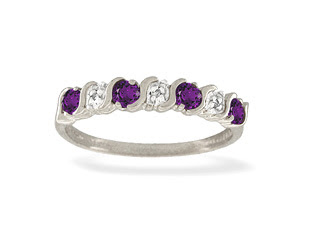 I love this band, I have such a thing for amethyst - it's so pretty!

Today was all about being Just in Time. Waking up this morning I got up with perfect timing for going to breakfast, and we started on our boating geology. We had a beautiful morning, calm and sunny. I was the only person with any boating experience, so I sat in the back next to the drivers chair and helped everyone who needed it through the start-up sequence and then learning to pilot the boat.

We explored the first lake, then went through a marsh to the second. The channel was fairly shallow, and we ended up having to paddle through with the motor raised, since it couldn't be locked into a slightly raised position. I paddled from the back a good deal of the way, which was very enjoyable. I wish we could do all our work from canoes!

We explored our outcrops, taking samples and describing the rocks. We were careful to watch the skies, since we knew that it was supposed to rain and thunderstorm in the afternoon. Our second example of "Just on Time" was deciding to leave when we noticed some darker clouds moving in and the barest drizzle starting. It began to rain as we paddled back through the marsh, and soon began to pour. As we put in at the dock, we heard a large rumble of thunder. Some quick moving on our part and we had the boat shoved up and shore, and we were in the truck (and more importantly off the lake!) before the storm set in!

Dinner was alright, acceptable as far as cafeteria/contract food goes. But the last "Just on Time" instance happened as I settled onto my bed for some TV after work, and discovered "Krakatoa" just starting on the Discovery Channel.
Posted by Karlie at 7:10 pm No comments:

Today was more a day of ups and downs, as some days are.

-Went for a lovely long walk around Red Lake this evening, in the dusk

-The soup for supper was delicious

-Got to sleep in a bit

-Watched a bear cub run frantically onto the highway in the path of a Purolator truck. Said truck swerved to miss him, which scared the cub who dashed closer to the truck and smacked his muzzle on the back bumper. The cub dropped to the ground and lay still for 30 very, very long seconds, then got up and fell over a few times. He barely got off the road, dipped his nose in the water in the ditch, and then seemed better and gamboled off into the woods.

-The mine managers smoke inside the building, making office work difficult.

-Other seasonal workers (likely drillers) have returned and are smoking in their rooms in the hotel, which comes into our rooms via the gaps around our doors.

-It's supposed to rain for two days, which makes it difficult for us to do the boating work were supposed to do.

I'm very, very upset that people are allowed to smoke inside the hotel. It's harmful to everyone else, causes problems for people with asthma, allergies, and migraines, and makes everything stink. I have no understanding for why it's legal or acceptable for someone to (essentially) poison me and others around them. If you chose to smoke that is YOUR decision (and presumably your right), but I should also have the right to a smoke-free living situation. I feel that the rights of a non-smoker to breathe freely trumps the rights of a smoker to smoke - because the non-smoker is not causing serious health problems to anyone else by not accepting smoking in their area.
Posted by Karlie at 9:30 pm No comments: 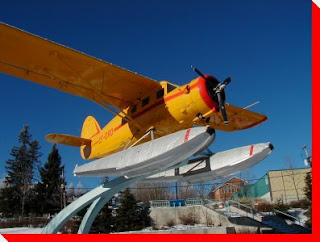 Red Lake's "Mascot" and namesake of my hotel - The Norseman Plane

Well, I'm in Red Lake! It's quite beautiful here, a little different from home. Less topography, more muskeg, and VERY different rocks. Lots of volcanics and fewer granites. It's extremely wet here right now, due to the continued deluge they experienced for about 3 weeks before we got here. It's very livable and even a bit enjoyable, but the dirt churned up by the drillers and skidders makes more mud that slops up past your ankles.

Claude Resources, and especially my boss Judy, rock so far. Claude pays for our rooms, all food (and anything we want to use to make lunches, pretty well), flies us in and out (and we're paid for those days), buys things we need to be more comfortable (fans, comforters), and also lets us keep our handlenses and things. Judy is awesome at explaining things, is very understanding, and has a great sense of humour.

We're working at Madsen Mine, picture below:

We're basically doing everything it says on that page, and looking for new and historically known gold locations. My job will rotate between field mapping and rock/soil sampling, scanning old maps of the area (most are gorgeously artistic from the 1920's), and logging drill core. We get to work using ATV's, and doing some lakeshore geology from the motorboat as well.

Today we went out to look at outcrop examples of the local rock types. We saw mafics, ultramafics, talc schist, quartz "tuff", and a few other things. We also ran into the following NOT rock things: 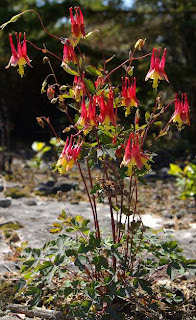 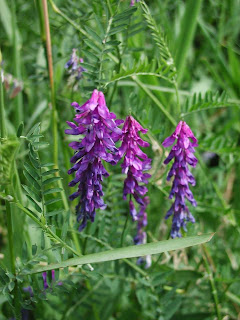 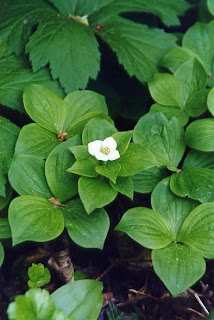 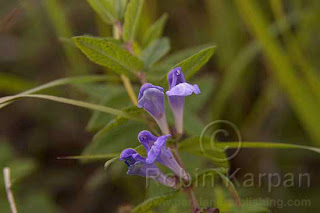 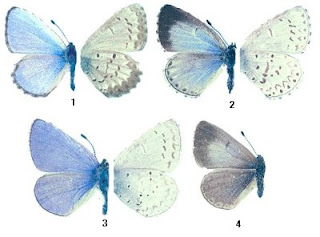 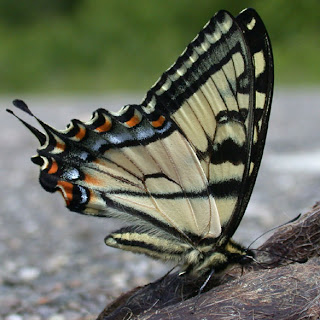 I love my new hiking boots so far, and we'll see how they work out tomorrow. Hopefully well!
Posted by Karlie at 7:27 pm No comments: