First of all, thanks so much to Marcia and Angela for the encouragements to feel better (yes, I did get the illnesses after all but one exam was finished, and I'm writing it in the New Year), and defence against the anonymous commenter. She's not actually anonymous (we both know who she is), but I've left the anonymous commenting up until now for interest's sake to see what she has to say and laugh at it. However, I think I'm going to disable it now. She's the only person who comments anonymously anyway, since Mom never does anymore *frowny-face* but Mom signs her name anyway. Oh wait, and Patrick. If you want to post a comment (cause I LOVE comments!) and don't have my e-mail address (I'm not going to post it here, although most of you have at least my old hotmail one, which I still check) you can go here: Blogger and make an identity to post. I realise it's an inconvience, but hopefully it'll discourage Miss Anonymous as well as spam.

And Miss Anonymous? I know his other girlfriend - Rachel :D She's a wonderful gal who's totally into Egyptology. And yes I know who YOU meant in your post, but really. Who's got the diamond here?

Marcia (and Patrick, if you see this) I need your up-to-date e-mails and addresses, so once Christmas is over I can send you New Year's cards, seeing as I was too sick to send ours out as Christmas cards.

Christmas updates: Dad's done, Becky's done, Grandpa's almost done, Sean's/Chris's/Tom's/Mary's/Angela's all half done, Grandmas' not started yet, Mom's not started yet. I promise this is NOT anything due to priorities, it's that some projects were transportable and could be brought back and forth between school and got done first.
Posted by Karlie at 1:17 pm No comments:

An ear infection, throat infection, and stomach flu have all conspired against me to prevent me posting or making Christmas presents. I'll be back sometime :P
Posted by Karlie at 8:45 pm 3 comments:

Knitting is still going on, as is exam studying. Monday's exams went crappy, with almost everyone coming out of the first with no more than a 70% on it (he posted the answer key outside). I personally got about a 66%. The second was ridiculously difficult, and again I think I got about a 70%. Seeing as I had 85 to 90% in these classes BEFORE the finals I'm a little ticked. It's not like I didn't study enough, it's a case again of the questions being SO specific I couldn't possibly know enough to have answered all those questions. At least not when I needed to have enough crammed into my head to write two exams that day.

Today I'm studying for Wednesday's evening exam (Plagues and People), going to a Structure Lab review session, and maybe working. Not sure about that, because I need enough time to study. I think I'll work tomorrow afternoon before my exam though.

I've been knitting on a few projects, got one half done and the other just started. I'm a little stressed about getting these things done in time for Christmas, but we'll see.
Posted by Karlie at 10:00 am 1 comment: 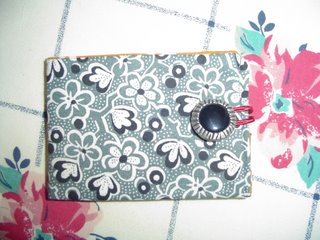 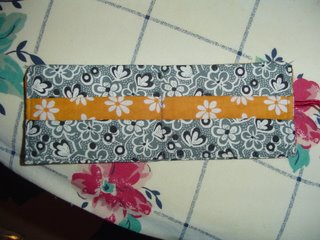 These are images of one of the wallets I've made using the tutorial found here. I'm making many more in order to supplement our not-quite-enough income. When they're finished I'll post pictures, but I can describe them for now. I have more like this one, ones with the orange daisy fabric inside and plain blue outside, ones that are Care Bear print with blue inside, and ones that are in bright African prints, mainly green, black, and gold. I'm not exactly sure what I'm charging for them yet, I'm hoping to generate some interest!

Oh, and I have permission from the tutorial-maker to use her pattern to make money :)
Posted by Karlie at 5:46 pm No comments: